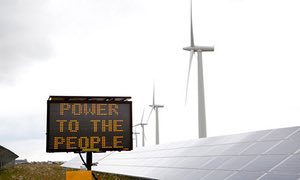 A brief history of community energy

In last week’s blog I discussed the evolving role of local government in combating climate change, concluding that an opportunity exists for local authorities to take on a leadership role, working with partners toward mutual goals. This week I consider the potential partners: community energy groups.

Civic engagement has a mixed history in the UK, already in my research I am seeing varied attitudes towards involving the community from the governance bodies I have encountered.  This appears in stark contrast to nations like Denmark and Germany where communities are a powerful force in local governance. Nowhere is this contrast starker than when it comes to energy.

To understand these differences a researcher at Oxford University identified 4 driving forces behind the development of community energy: planning policy, support schemes, general attitude and national culture. The UK’s relatively underdeveloped sector began as a result of the latter two factors. Attitudes towards collective action in Germany have been shaped by the success of their community banking sector, where a minimal history of collective action in the UK has resulted in lower confidence in the sector.

Without a strong history of community energy the UK started at a relative disadvantage when policy support schemes (such as the feed-in-tariff) began making renewable energy business models viable. Despite major gains in the field between 2008 and 2015 the sector was not able to build the momentum achieved abroad.

With reduction in FITs across Europe taking effect over the last two years, resilience of existing schemes became a more significant factor than drivers for new schemes. In these years we have seen a refining of the existing schemes, with groups who are able to adapt to the new, harsher commercial conditions surviving and less fortunate groups loosing traction.

Today’s community energy sector may be smaller but it is stronger and more experienced than ever. While the limited policy support has doomed many projects, groups have been developing creative new approaches to taking control of their energy, with group buying, alternative financing and experimental partnerships coming into their own.

Having faced adversity and continued on the UK’s community energy sector has proven its viability and diversified its approach, presenting a strong basis for future development. The future of community energy will be dynamic and varied, just as the communities who produce it. Thus engagement and support present a challenge for local authorities (albeit potentially rewarding). Thankfully SmartKlub is here to help.